Well after hearing many reviews already on the 2010-11 Score, I thought I might as well throw my opinion into the puzzle. First off, I went a little bit crazy. Actually, my dad is the crazy one (can't say I'm complaining though). I walked into my local sports card shop having the full intentions of buying one $35 hobby box myself. But to my pleasant surprise my dad felt like a very generous man and bought me another box! Thank goodness my dad is crazy because I really cashed in on the box he bought for me!  From the moment I opened the first pack - I LOVED IT! What a great set! When my uncle gave me his old collection it consisted of a close to finished set of the 1990-91 Score, and I had always admired it, and this set really captured the essence of it! Hold on, because this may be a long one. Let's start with the Highlight Cards.

HIGHLIGHTS
RATING: 9/10
Rundown:
Reg. Season Highlights Cards: 1-35
Stanley Cup Playoff Highlight Cards: 486-500
TOTAL: 50 Cards
TOTAL I OWN: 37 (2 Canucks)
These are fairly similar to the base cards with the slight difference of the "blue, red, blue" striped on the sides. I wonder why they didn't add those stripes to the base cards as well, they add more of a vintage feel to the card; oh well! I picked the Marco Sturm card because of the photo, the photographer caught the celebration really well and the winter classic is a pretty cool time to score an OT winner. I picked the Chicago card for the obvious reason, because they won the cup...bleh.

BASE
RATING: 9.5/10
Rundown:
Cards: 36-485
TOTAL: 450
TOTAL I OWN: 399 (17 Canucks)
Ding Ding! This is a winner! Beautiful cards, great variety of photos (vertical and horizontal), position and team clearly stated, added Stanley Cup winners, all rookie team, and traded information. Notice the Stanley Cup on the top right corner of Brent Seabrooks card, and the "all Rookie Team" icon on Tyler Myers. Only thing I would add to make it a little more authentic would be the blue and red stripes on the sides, besides that, great cards.

GLOSSY PARALLEL
RATING: 7.5/10
Rundown:
Included in bases set
You might be wondering "why have you rated this so much lower than the base set Michael, when they look exactly the same?" It's because of just that thought. They're exactly the same! You can hardly tell the "glossiness" exists! Very poor thought put into this one, I'm sorry to say. Next time try a little harder. 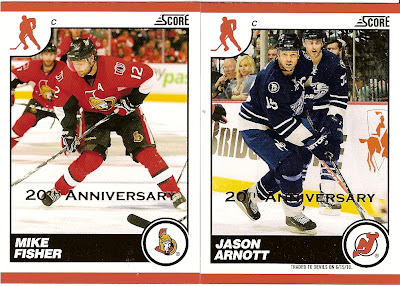 20th ANNIVERSARY
RATING: 8/10
Rundown:
Cards: 36-485
TOTAL: 450
TOTAL I OWN: 2
Well this is a little better, plain, but better. If I were to add one thing to this card I would probably put a gold trim around the card to make it pop out as the 20th Anniversary Card, but that's getting a little picky. As a side note, notice the traded information at the bottom of Jason Arnott's card (just below the team logo).

HOT ROOKIES
RATING: 8.5/10
Rundown:
Cards: 501-560
TOTAL: 60
TOTAL I OWN: 43
Well I was very excited to pull all these 3 cards from the box my dad bought me. Three top rookies! Unfortunately most rookies weren't so hot, besides the select few. What puzzled me was the fact that the rookies (I thought) were suppose to go from 501-550, but the Tyler Seguin card is card #554. To add to the confusion, it's also made on thicker card stock, hmmm...weird. As for the design of the card, I like how they added team colours, and the name and the position were prominent. only disappointment was not pulling the only Canucks hot rookie; Evan Oberg :( maybe next time. 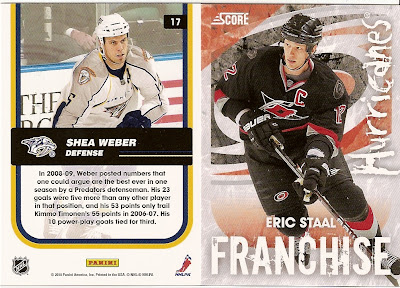 FRANCHISE
RATING: 7/10
Rundown;
TOTAL I OWN: 2
Well they went for the scrappy look, and IMO they didn't do too bad. I like the team logo behind them and the back is simple and to the point.

PLAYOFF HEROES
RATING: 8/10
Rundown:
TOTAL I OWN: 12
All of these cards are horizontal, and I have to say this ain't a bad looking card. They touch only on the playoffs, and the card is easy on the eyes. I especially like the rink-like texture look on the back.

SUDDEN DEATH
RATING: 7.5/10
Rundown:
TOTAL I OWN: 2
To tell you the truth, when I first looked at this card I thought Eww, what a bad looking card. I figured there was too much going on for the card, the name, date, logo, the big SUDDEN DEATH spread apart. But after looking at this card for a while I really do enjoy this card now, especially the neat font used on the back. So I'll give it a nice average mark, I may be a little bias considering how much I enjoy opening all the packs for this set so maybe my ratings might be lower after I'm not so excited.

NET CAM
RATING: 9.5/10
Rundown:
TOTAL I OWN: 6
Favorite card of the parallels to say the least. I love everything about this card, from the variety of photos of all the scrambling goalies, the team colours, and the overall presence of the cards. Love these cards, definitely gonna try and collect them all!

SNOGLOBE
RATING: 8.5/10
Rundown:
TOTAL I OWN: 2 (1 Canucks)
Well it's a pretty cool variety of different parallels, so they might as well throw in a die-cut. I'm extra happy to get a Roberto Luongo. I have to say though the back of the card needs some work.
RAP UP
Well it was quite a thrill opening 2 boxes of 2010-11 Score, and I'm very happy with the outcome. Great rookies, some nice looking parallels, and about 20 Canucks cards. I do have one more card to show you from this set, but you'll have to wait until tomorrow for that. Heres how the stats look...
BASE CARDS/GLOSSY: 399
ALL PARALLELS: 105
CANUCKS: 20
TOTAL: 504
TOTAL RATING: 8.5/10
Two quick last thoughts...
1. If your interested in buying any type of sports memorabilia check out my friends at www.sportsmemorabilia.com, they're website will always be up by the top right hand corner of the page.
2. I'm starting a post called Michael's Ratings that will constantly be updated with a run of the rating of cards and sets I have mentioned in my past blogs, that will also be posted somewhere on my page.
Phew, that took a while,
GO NUCKS GO!
Posted by Michael at 6:03 PM 3 comments:

I was thinking of a little segment to do every week (or so) and going through my collection a neat story caught my eye. When I was younger, my grandma (believe it or not) got the privilege of meeting one of the Canucks all-time best goalies. Richard Brodeur; famous for his 1982 run to the Stanley Cup finals with the Canucks; waltzed into my grandma's office. Richard was a nice enough guy to give my grandma a signed book from himself. My grandmother knew I was a crazy hockey fan and quickly called me and passed the book along. This is what the front cover looks like: 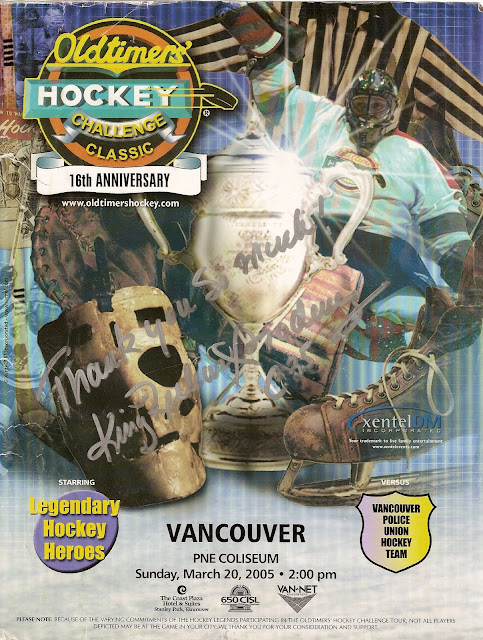 Obviously I was pretty psyched to receive a signature from an old time Canucks goalie, but for some odd reason it never occurred to me to actually look inside until 2 years after I received the book. Why?? I have no clue. But to my pleasant surprise there were 10 signed "hockey cards" of old-timers inside. So I've decided to post a card a week, just for kicks. Let's start with this: 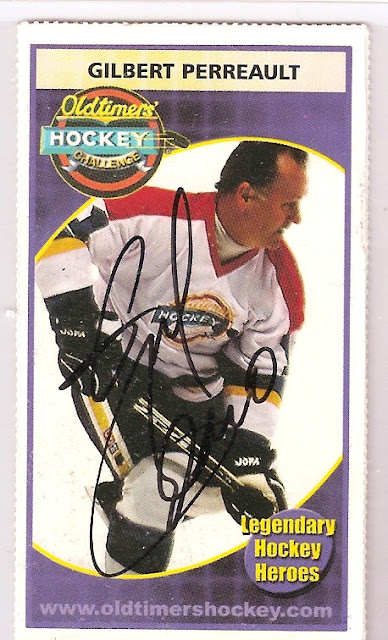 Gilbert Perreault
Reg. Season Stats: GP-1191, P-1326
Playoff Stats: GP-90, P-103
Now, this isn't a "real" hockey card since it isn't made by a real company, it's more like cardboard tear-outs found in a magazine. But, it adds to the uniqueness of the story and the card. Nonetheless, it's signed and I'm very happy. It's an interesting signature, although it's more like a scribble. I have to say though some very impressive stats for Mr. Perreault, so I'm very pleased to own it.
Michaels Rating: 8/10 (even though it's not a real card)
GO NUCKS GO!
Posted by Michael at 3:50 PM 3 comments:

This November I bought the 2010-11 Beckett Annual Pricing Guide. So my big project over the past month has been marking each individual card with their card value. I have to say I was a little bit disappointed with the value of almost all cards from the 90's, as "valuable" rookies were not going for as much as I would have liked. BUT! I did find one very unusually high priced card. Well, let's see if you guys can pick out the value of the card and why it's worth more than all the other 10 cent cards of its set. 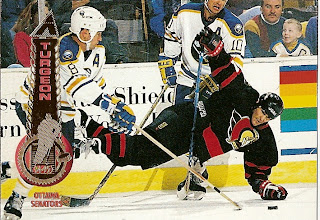 1994-95 Pinnacle
Sylvain Turgeon
Well believe it or not this card is the highest valued card in the 1994-95 Pinnacle base set. Any guesses why?
Ill give you some hints...
1. It's not a rookie
2. It's not because of Sylvain Turgeon
3. It's not because of a Buffalo Sabres player
4. It IS because of someone wearing a Buffalo Sabres jersey
Yes, it's the little boy in the top right hand corner sitting on his fathers lap that makes this a $15.00 card!
That little boy is indeed younger Patrick Kane!! WOW!
Now I can't say I'm Mr. Kane's biggest fan, in fact I can't call myself a fan of him at all (mostly because Chicago has knocked out Vancouver in the second round two years in a row now).
But isn't it incredible how a cards value can be increased by a fan and not even a player!?
I was certainly in awe, and this card went right into my Crazy Card pile.
This is really what collecting is all about, isn't it?
I have to say things like this really put a smile on my face and make me want to collect even more!
Michaels Rating: 7/10
GO NUCKS GO!
Posted by Michael at 1:01 PM 4 comments:

My name is Michael and I'm a high-school student who has been interested in collecting hockey cards since elementary school! For my first post I'm going to tell you how I got into collecting, who and what I collect, and what I intend to post in future.

First off, I got seriously into collecting when my uncle handed me all his duplicate hockey card from the mid-80's to the early 2000's as a young boy, since then I haven't stopped collecting! My favorite team is the Vancouver Canucks, so whenever I go out buying or trading I always look for Canucks cards.

I really was inspired to start my own blog after a year of reading my fellow bloggers blog "My Hockey Card Obsession". Although, I don't nearly have the collection he has and it can be discouraging seeing all the crazy cards he owns, I still try my best to keep up. I'm simply collecting for kicks!

Along the way, I look forward to sharing some cool hockey cards I own and in the future would love to own. Along with an in depth look at some hockey card sets.

Well it's nice to get the first post out of the way, and I'm looking forward to my second coming up in the next few days!