After pulling a pretty sweet Jimmy Howard insert I knew it had Paul from "Card Boarded"'s name all over it. We got in contact and bada-bing bada-boom a deal was made.

The AUTO is of former Canucks grinder - Gino Odjcick. 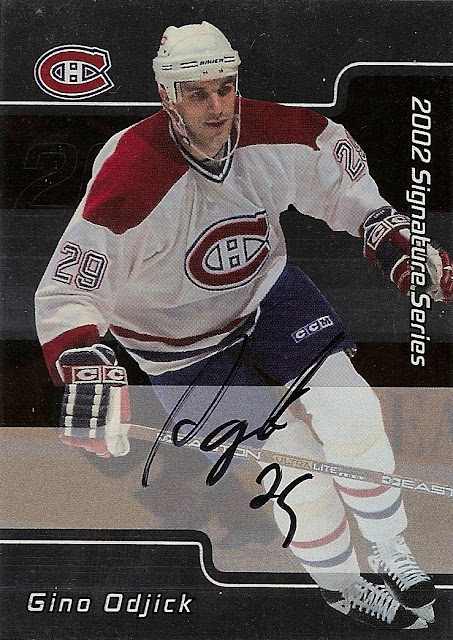 A nice on card AUTO of a Canucks alumni. Doesn't get much better than that!

Even more exciting though was the extra goodies Paul threw in for me. We had agreed to send 20 randoms each way but Paul, being his generous self, sent almost 4 times that! I don't know why I'm surprised, there are tons of really kind guys in the hobby and Paul is right up there. 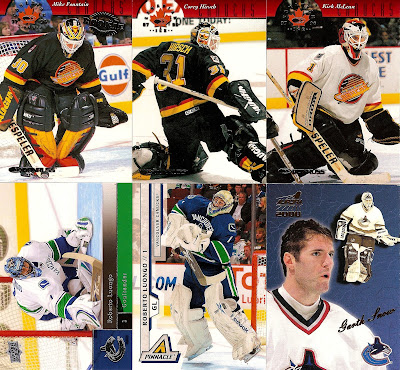 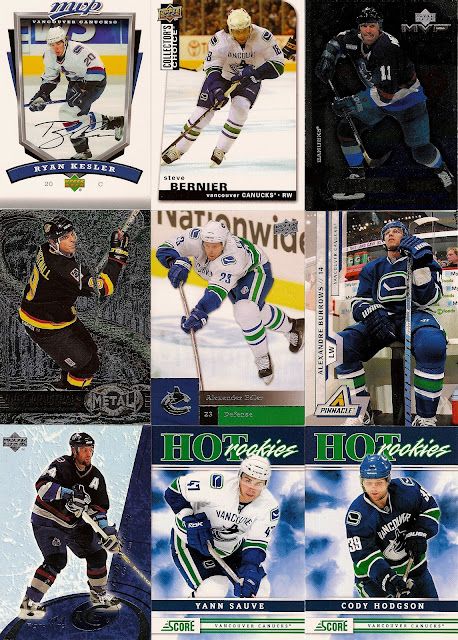 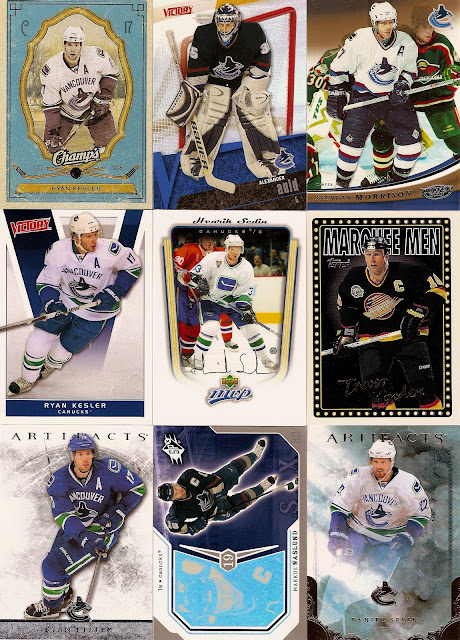 This is just the tip of the iceberg when it comes to the generosity, can't thank you enough! Some really nice finds from a dozen different years and dozens of different sets. These are gonna look sharp in my Canucks binders for sure!

A week back, on NHCD in Canada, I purchased a box of Limited. Little did I know the monstrous effects it would have on my Canucks.

My first hit was of a young Dallas rookie name Brenden Dillon. I had no clue who he was except for the fact that last season he appeared in only one NHL game. 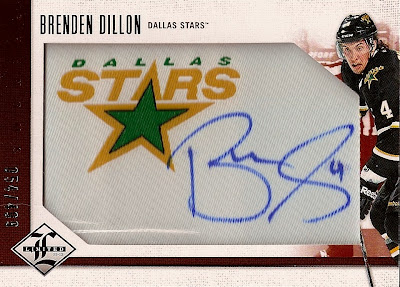 This season he has played 16 games in the big league and has had quite a positive effect on the Dallas back line. When February 15th rolled around, it was game time against the Stars. It had the aggressiveness and grit of a play-off game, which I have yet to see in a Canucks game thus far.

With three minutes left in the third and the game tied at three, this happens...

Fast forward two more nights and the Canucks play home to the Blues. Who's in net for St. Louis? Non other than Jake Allen.

I also pulled a nice GU piece of him numbered to /99 copies in my Limited break. 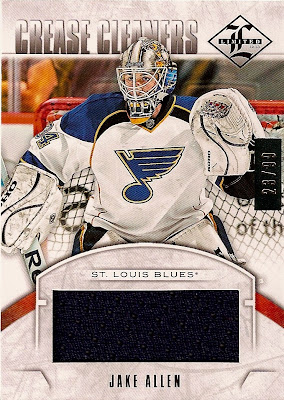 Another 3-3 hockey game in OT. Allen has played a solid game but still nothing to write home about. Until with less than a minute left in OT, Burrows gets a beauty chance, and then...


... Jake Allen makes a beauty glove save. He went on to save both shots in a shootout to win the game for the Blues.

I'm just waiting for my other hit of Gadsby and Ullman to bite me somehow. I don't know, how but it will.

My Nucks were on a six game winning streak until they met those two hot rookies; now they are 0-1-2 in their last three.

I tend to follow the players I get "hits" off. Do you tend to do that? Has this ever happened to you?

I wouldn't wish it on my worst enemy...except the Blackhawks.

GO NUCKS GO!
Posted by Michael at 1:17 PM No comments:

Happy (American) National Hockey Card Day to all those south of the border. For us Canadians (eh) we had our second Christmas last weekend.

I already posted my big box break of Limited but along with those cards came 2 free packs of UD's NHCD set. Since I know the owner of my LCS pretty well he hooked me up with an entire complete set.

Along with the three checklists, there were four sub sets.

"Hockey Heroes" has all the retired Canadian legends such as that beauty Bobby Orr card. I might add all the cards feature the player in Canadian gear. That Orr is a classic!

Next is "Pride of Canada," which is shown in the middle with Sid the Kid. These are current Canadian NHL stars.

Finally is "Canada's Rookies," which is pretty self explanatory.

But then there is that one extra subset. Only one card... 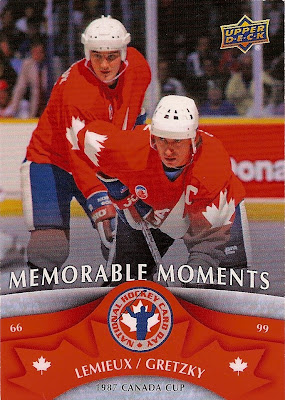 Ya, I would say that's a pretty "Memorable Moment." This is card 16, and I think is a little bit of a tougher pull. Not sure, correct me if I'm wrong.

I got a few doubles from two extra packs so if anyone needs anything to complete a set, let me know!

We'll finish off with a full view of the loot: 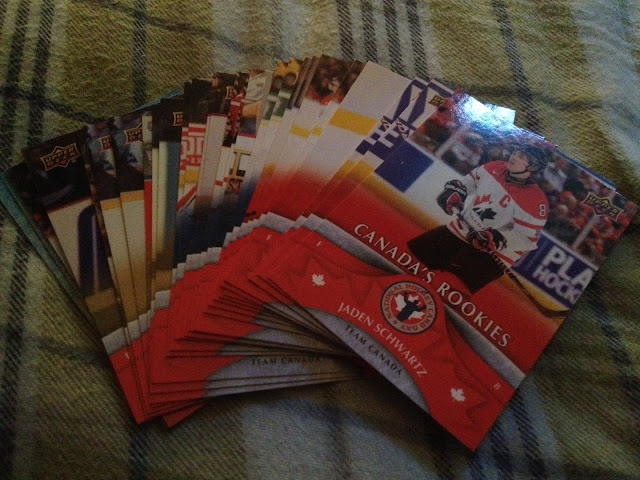 I hope everybody in Canada and the USA had a great National Hockey Card Day! North of the border, I had some success breaking a "high-end" product, which I don't do very often. I decided to spend my money on a box with only 7 cards in it, 2012-13 Limited.

I'm going to go out on a lim and officially say, I am a fan of Panini products. The price, value of hits and variety of sets, gets me every time. But that's a whole different post.

I originally made a quick 5 minute video of my box break; however, it's not uploading. So, scans it is!

Let's do this as a card by card thing. First card I saw after unwrapping the silver foil wrapper was a base card of Mikka Kipprusoff and another of recently re-signed P.K Subban. 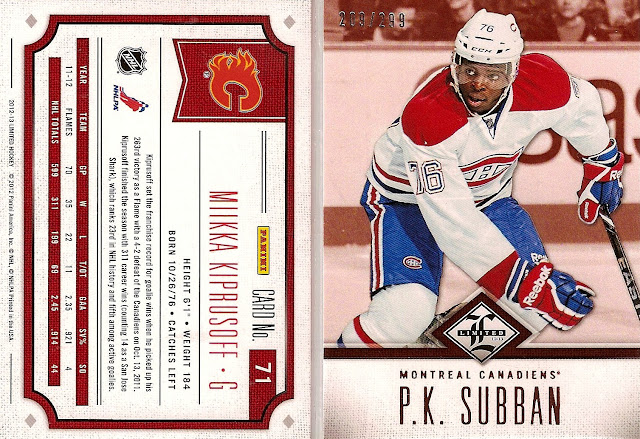 i scanned the back side of the Kippy to show off the design. In most cases, I prefer I product stick with one direction on a card (e.g. vertical front, vertical back) but in this case, the back of the card matches the front perfectly. I really like the simple and classy design this card gives off and the thick card stock is a really nice touch!

But base is not what I spent 120 bucks on right? 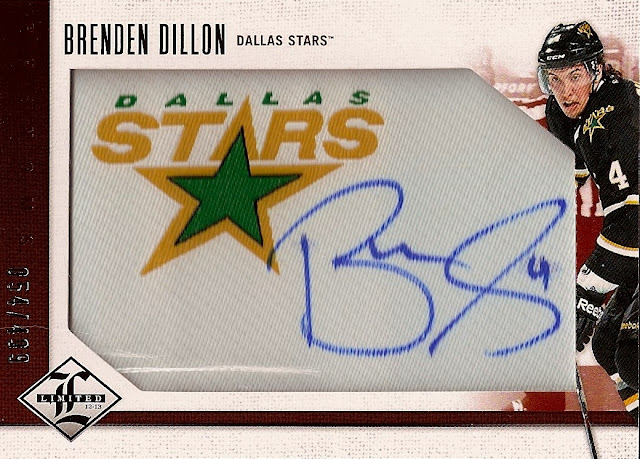 My first hit, was this beautiful "Phenoms" rookie AUTO if Brendan Dillon. Brendan who? Ya, with only one NHL game under his belt, I don't know who he is either; however, the card is great. I've always admired these fabric AUTO's. It gives that signed jersey feel; plus, Brendan has a decent AUTO including his number. Not a bad first hit despite the "high" serial number of 499 copies. Still, I'm not jumping through hoops about this box quite yet. 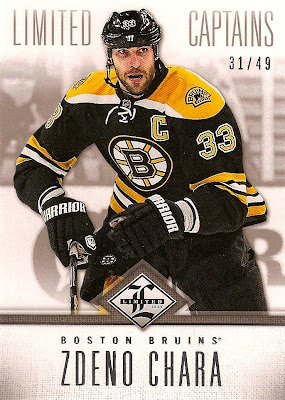 A nice low numbered sub-set was this "Limited Captains" card. Only downside - a Bruin (of course). Although, I don't hate Chara as much as I hate some other Bruins *ehem* Marchand *ehem*. Anyways, this is a nice addition just not my favourite player. Up for trade if it catches anyones fancy. 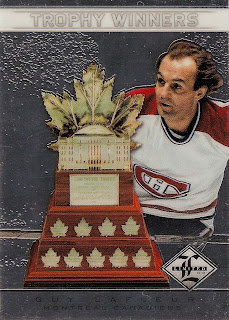 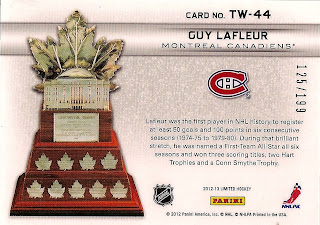 Now THIS is what I'm talking about! This is a SWEET insert. Sure "Trophy Winners" has been done tons of times, but the execution is perfect! The textured foil surrounding the images of Lafleur and the Conn Smythe trophy is dealt in a classy and appropriate manner. Big thumbs up Panini! This card is right up my alley, I'm a big Guy Lafleur fan and numbered at 199 copies is very fitting to the insert set. 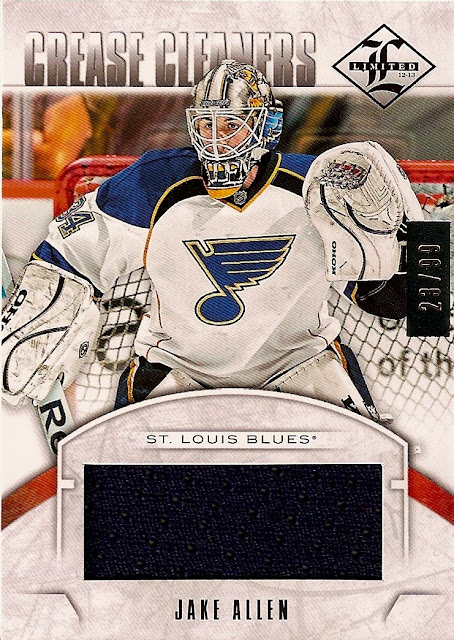 Well we are down to the final two cards and things are going good, but not nearly great. I still have two big hits left. The first of which is directly above this text. This card is from a really nice GU set and even better name. It's numbered pretty low at 99 copies, which adds value in my eyes. The swatch is a nice dark blue; although if I had gotten a white swatch I would tear another one into Panini. There is no space for all white swatches in a product like Limited. Jake Allen is a nice prospect and one I'll watch now that I have his card. 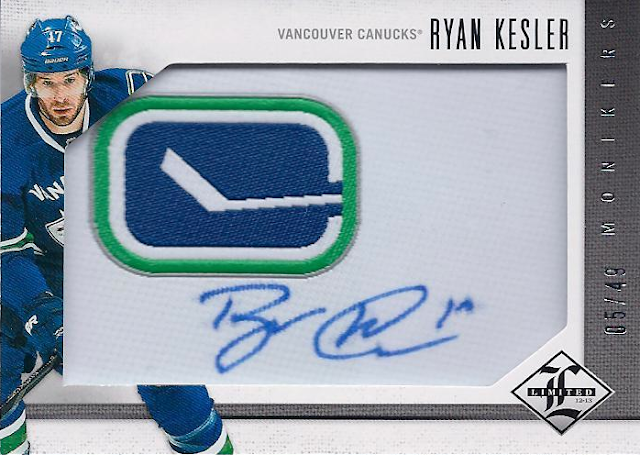 Well, this is a scan of eBay because I actually don't have this card anymore. Shocker right? I seem so lucky to pull a low numbered BEAUTIFUL AUTO of a Canuck and I trade it away? Yup I did. Truth is, I'm not a huge Kesler fan. My version of the "Moniker" AUTO was not quite the same as the one above. Mine was numbered to /99 NOT /49 and it had the Canucks "Orca" logo not the "Stick in the Rink" logo.

So I traded my only Canuck hit, for what? Take a looksy: 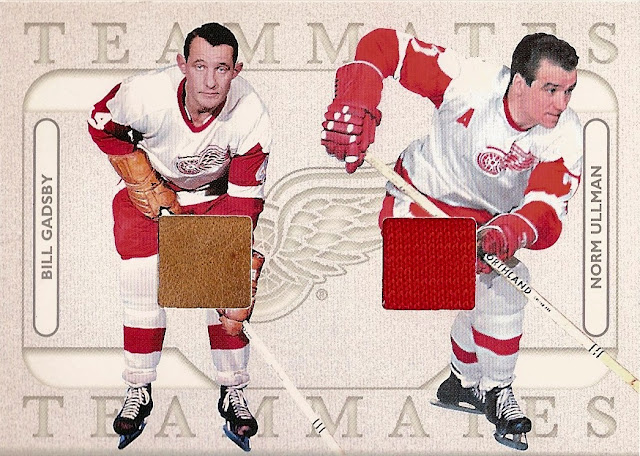 What's happening to me, am I going mad or what? I traded a Canucks AUTO for a Red Wings dual GU card. Yes I did.

Only about 10 minutes after leaving my LCS I marched back in with the Kesler in hand and showed the owner and his wife. They were happy when I said I wanted to trade it and they thought I was crazy. The inflation for Canucks GU and AUTO's in that shop is crazy and I knew it would probably get a 60 dollar price tag (I know crazy). He told me he would sell it for 50 and he always trades half od the sticker price.

Fair? Sure, they need to make money too. I said, "Hows about we call it 30?" He agreed and off I went. As luck has it this Bill Gadsby and Norm Ullman dual GU beauty had the perfect 30 dollar price tag. I swiped it right away.

I mean two HOF's from the 60's is a no brainer right? That Gadsby GU piece is a leather piece from his glove, cool right!? My first GU glove card, yes! Plus it's nice dark red Detroit swatch on the Ullman.

Overall, I didn't really make my money back in secondary market value. But who cares? I probably won't bust another box of this this year, so I enjoyed it for sure!

I'm pretty tired now, so I'll post up my NHCD pack rips tomorrow. But how was your February 9th? Bust any boxes/packs? And what's your opinion on the newest Limited product from Panini; good or bad?

Upon my daily browsing of the Vancouver Canucks official website, I found a very neat video about something we all love in this hobby blogging world - autographs!

You don't see much of players talking about their signature or even picking apart their fellow teammates, so I found this video quite entertaining.

The Canucks are a funny bunch of guys which doesn't hurt either. Check out the link HERE.

A couple observations I made.

2) Higgins, like many others, just guesstimates where the dots in his name go. 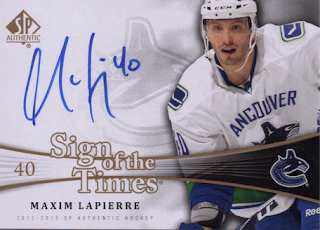 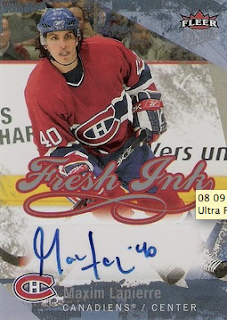 I wouldn't say Lappy's signature was great to begin with, but it definitely did decline after a couple of seasons!

What did you think of the video, any other related vids come to mind?