It seems as though while my fellow bloggers have picked up the pace I've been slowing down lately. I attribute that to the break, there is just too much to do in so little time. Between spending time with my massive and crazy family, religiously attending stick and puck sessions, and getting ready for a family wedding coming up in the next couple days; hockey cards have fallen to almost the bottom of the list.

Yesterday that changed. As I was on my way to my uncle and aunts place, I decided to snatch a quick pack and a monster box for storage. That pack happened to be this years Artifacts set. Since I haven't done a video in awhile, here's what I put together:

There you have it, after a couple weeks off I'm back to the grind. Hopefully I can pack these next couple weeks full of new cards and some creative posts!

After 9 posts of "What Does 25 Bucks Getcha?" we have finally reached the last card. After two $25 Visa cards we end with my first card I required from the 2011-12 season (I bought this awhile back).

When Artifacts came out a few months back I was fairly impressed with the product. But as any new product on the market, the asking price for even single cards were a lot pricier than their counterparts from a year before. Despite that fact, I decided to dive in and buy a single AUTO from this year's product. Let's take a look: 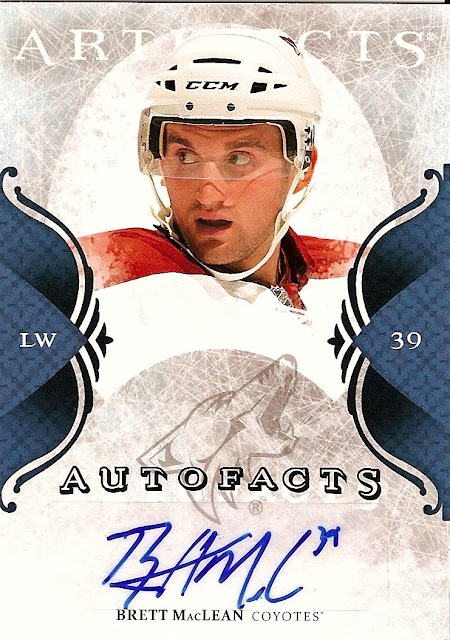 I really don't know what inspired me to grab this card. I'm not a particularly huge fan of Brett MacLean but for some reason everything just seemed right. A new product, an autograph, and for a fairly moderate price with the little money I had left in my second card. For around 4 bucks this will happily go into my autographs tin. If you're particularly interested in this card though, don't be afraid to make an offer!

Oh! And before I forget, I also have one small card to share from my box break of this years Score. 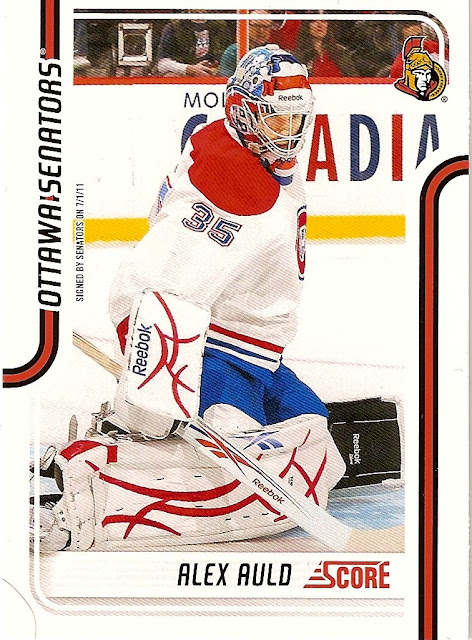 This card may seem insignificant to most but it is indeed a card going toward my Goalie Project. I shuffled through my recent box/tin of Score/UD Series 1 and this is the only non-Canucks wearing goalie I pulled that fits in the Goalie Project. Even though my Auld's are all complete, it still goes in the binder (for the sake of the project).

Here we go again as we slowly inch our way to the top ranks in this countdown of my top 60 cards. The cards are slowly getting a little fancier, today I have 2 Game-Used and 1 Auto to rank. Let's get started. 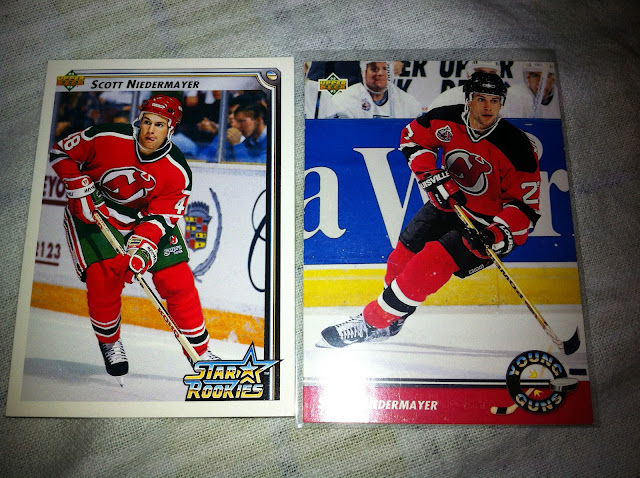 We start with a pair of cards. These are both from the 1992-93 UD set and it showcases not one but two different RC's. I don't really see the point of having a "Star Rookies" sub set and also a "Young Guns" set, but I guess they both count as rookies. Once again I have an inexplicable liking of these cards I believe I inherited in my childhood. 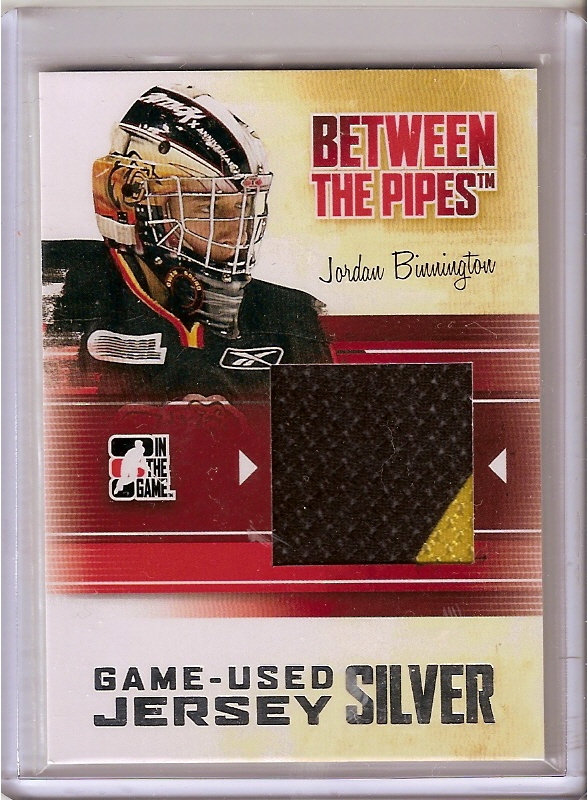 This was a card I pulled from the Between the Pipes box I broke last year and was in fact my very first multi colour swatch jersey card. If memory serves me correctly, the silver variations are numbered to 30 copies but I could be wrong. 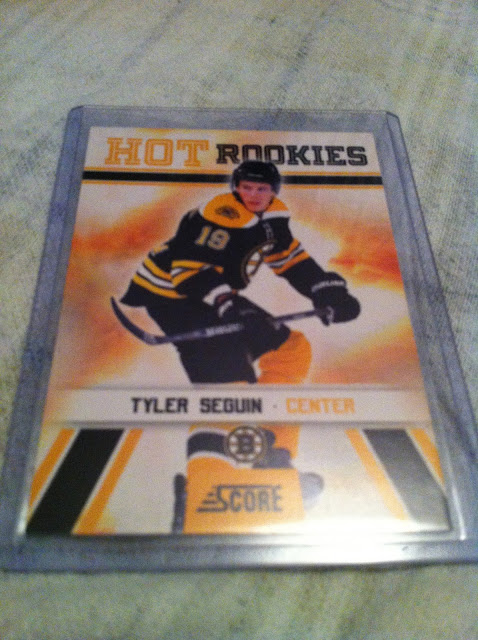 I also pulled this from a box last year, this time Score. If you read my blog regularly you'll know I recently pulled a SSP Hot Rookie of Ryan Nugent-Hopkins with my box break this year. That card would also be in the 28th spot but I'm waiting it out until I finish up all 60 cards and after I'll do a continuous update. 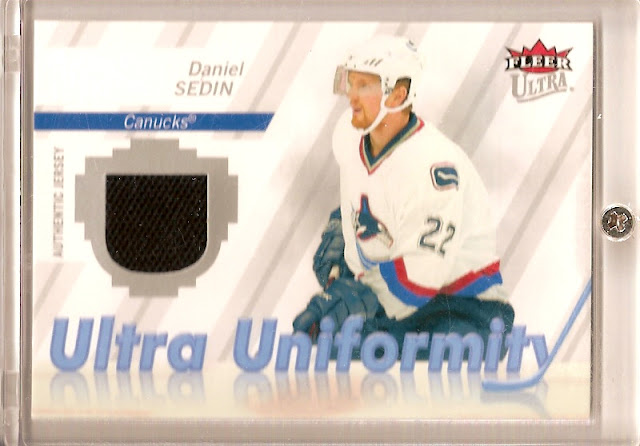 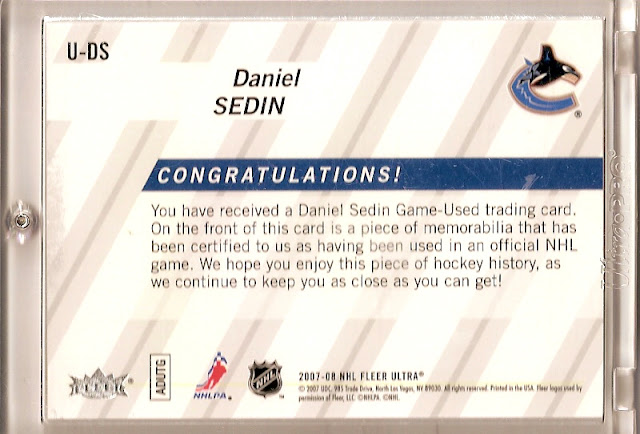 This card came in a trade with Dave over at Wax Stained Rookie. This card symbolizes the start of my goal to collect more GU cards and really gave me some inspiration to kick start my collection. Plus it ain't to shabby to have a piece of jersey from an Art Ross and Ted Lindsay Award winner. 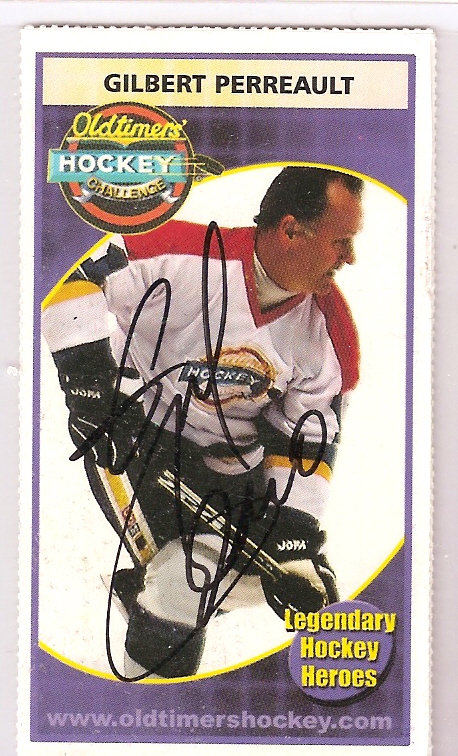 This final card brings back memories from all the way back to my second post here at collectingforkicks. This is the first card from my former segment "Old Timer Treasures". Long story short, my grandma gave me a booklet when I was younger with a page full of old time hockey players signatures. Gilbert was one of them. With one of the nicest sigs and one hell of an impressive career, this card will always be cherished. I never really ever appreciated this card until recently, obviously it deserves a comfortable spot at number 26.

Year after year Upper Deck's flagship product has been consistently good - photos, design etc. But in my PC it somehow gets ignored (breaking wise). This year I look to correct that and give Series 1/2 the credit it deserves. That being said, today just so happened to be the day I picked up a tin. For 33 bucks with taxes in, I received 12 packs with 8 cards in each. But wait I get a bonus pack! Oh, and you can't forget that jumbo card! (sarcasm sensed?)

Let's start with just that - the jumbo card. 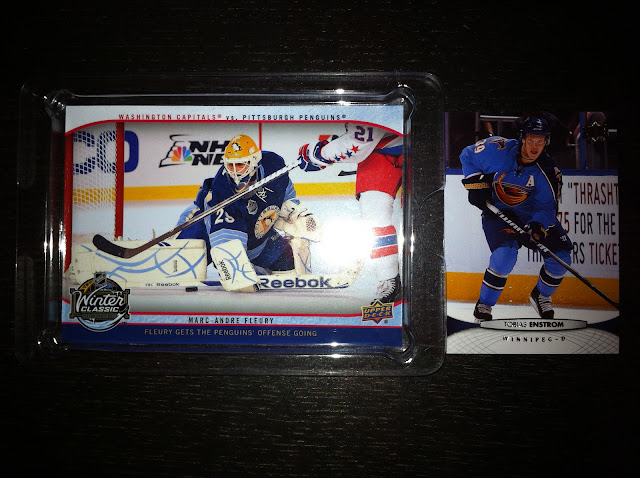 Just so everybody believes me, I put a generic base card next to the jumbo Winter Classic. Love the mask on Fleury, I only wonder if they have an action shot of Crosby getting knocked out (too soon?). 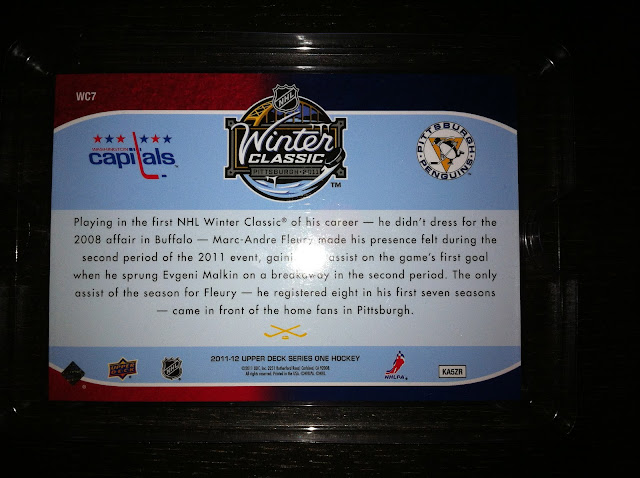 Okay, now onto the base. I'm sure you've all seen these cards already, most of you probably own this product already. So I won't dissect every corner of the card for you. Here are some of the best pics I found in my break. Starting with the horizontals...

Such good quality photos, I love it! This is what makes a product truly worthwhile when you're a card dissector (like myself). 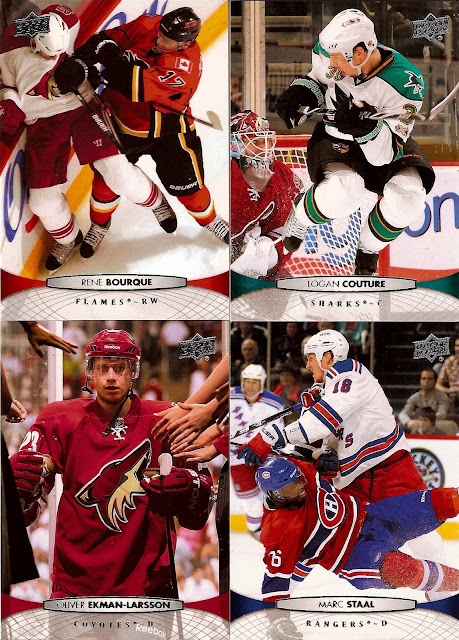 Really good use of hits in the verticals. Doesn't quite get any better than that. 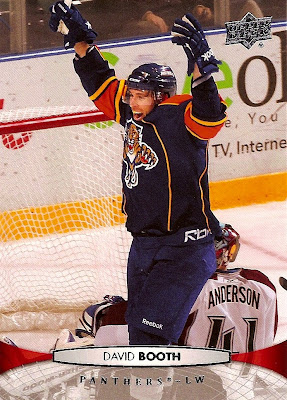 The David Booth card is the only "Canucks" card I got in my bunch of base cards. Kind of disappointed considering the math says I should have at least gotten 2 if not 3. Into the Canucks binder it goes!

As for the parallels I was successful in pulling two UD Canvas cards.

As you can see these cards have a "painted" type texture to it. The Burrows is surprisingly the only true Canuck I got from this tin. One small pet peeve with the back of these cards is that I feel the photo on the back is almost covering part of the stats. I know they were trying to make the stats sit on the photo but it just didn't work out.

Next are the Young Guns...

Bleh. The only one I kinda like is Ben Scrivens, and I'm not crazy for him either. Looking for the CoHo and Sauve Young Guns.

Now onto the Inserts... 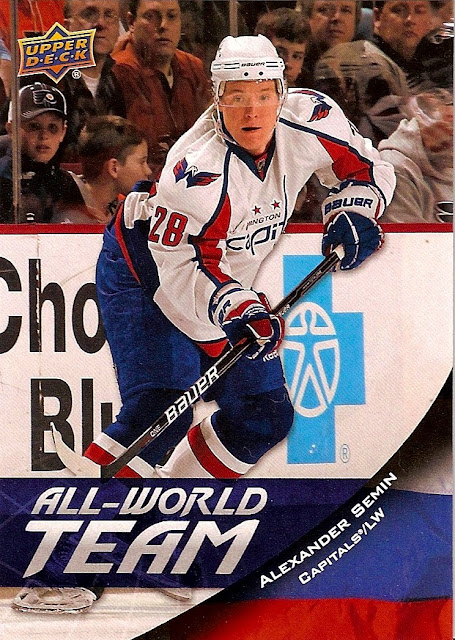 A fairly useless Insert set in my mind. 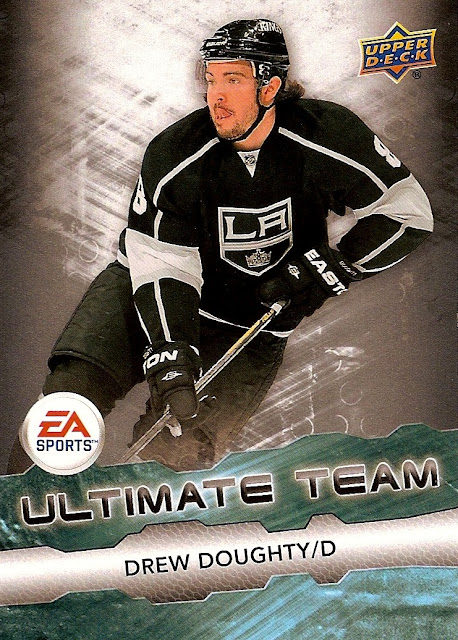 And this is also another fairly useless insert set. 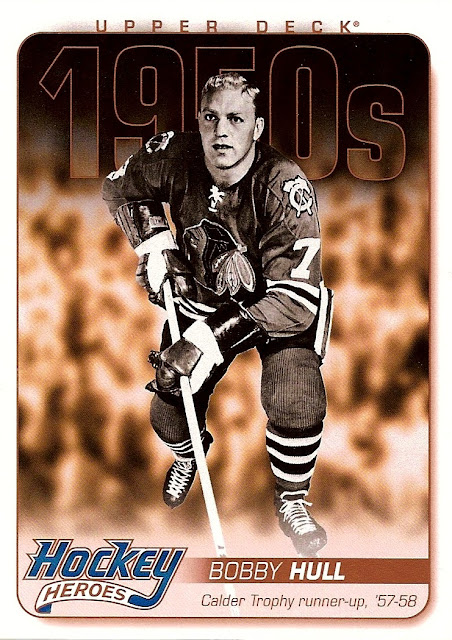 Here we go, that's a little better. I'm not in love with the design but the concept is an A+, plus it's Bobby.

Now onto the really good stuff. I seemed to have pulled a nice little hit in my tin, check it out... 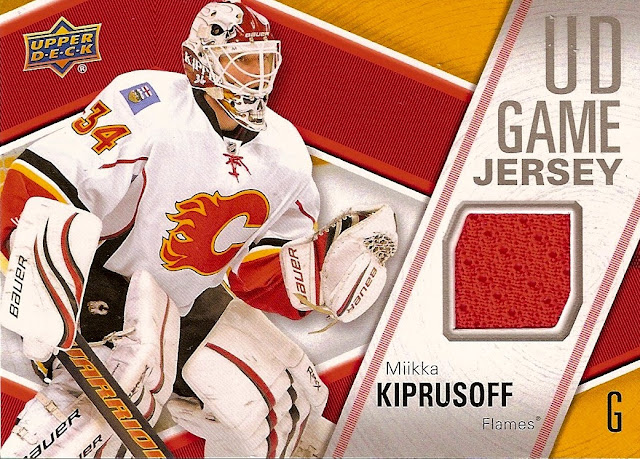 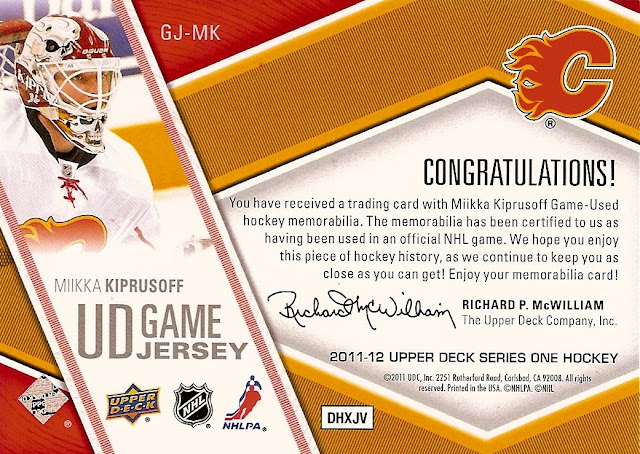 Okay, so it's not fantastic but it's still alright. Nice all red swatch from Kipper. I kind of like Kiprusoff mostly because the Sedin's seem to be able to work magic on him. Not sure if a GU card is average in these tins since this is the first I've picked up. But I'll gladly throw it into my slowly growing GU collection.

All cards are for trade except for the UD Canvas of Burrows. I'm looking for some CoHo and other Canucks as always! Drop me a comment.

I apologize (again) for the delay between posts. I broke three toes on my right foot at my last game and things have been quite hectic lately. But I'm back and I've decided to throw out a few more former Canucks goalies for another "Goalie Project" post. 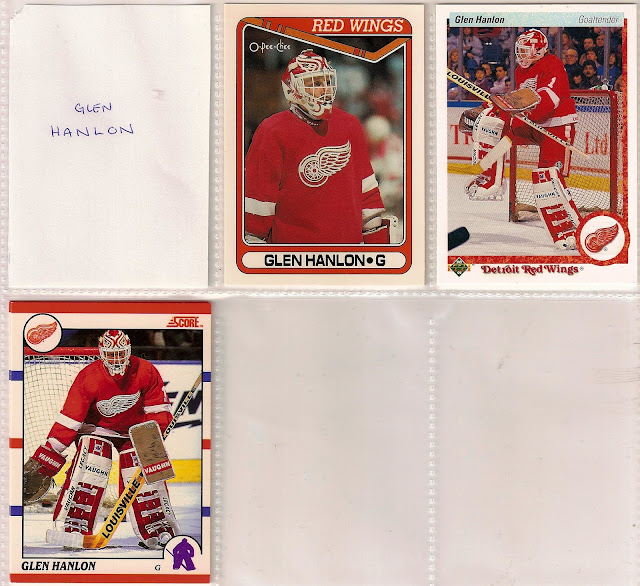 As you can see all 3 unique Hanlon cards I own are from his times with the Wings. Pretty cool variety if you ask me, especially the 1991 Upper Deck card where it looks like Hanlon is celebrating but in fact he's just making an extremely awkward save. Nonetheless I've still got a couple more cards needed for this part of the project.

Given from the video above it looks as if he wasn't scared to drop the gloves (and blocker) either. The other goalie must have said his jersey was ugly or something.

Next up is Bob Mason who only played in 145 NHL games in his career. But, he was a Canuck for a portion of it and deserves to be part of it nonetheless. 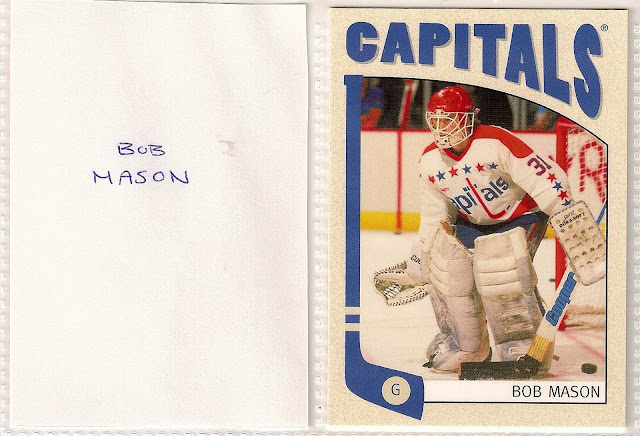 Unfortunately I only have one card of Mason and it's a throwback card from his times with the Caps.

Last but certainly not least is Cesare Maniago.

Cesare is probably the most recognizable out of the trio and definitely includes my favourite card from today's post. The middle card is a double and I feel it's somewhat of a staple point in my Goalie Project.